A Brief History of Jewish Music

Click here for the article on contemporary Jewish music

Music is central to the religious experience, indeed to the human experience, and there is no book more full of music than the Torah. If nothing else, the fact that the Torah is publically chanted, not simply read in a narrative fashion, should indicate the centrality of music as a form of deeper communication. Every word in the entire Biblical set of books has a musical note, called a " trope," attached to it.

Within the Biblical period itself, we find song to be the language of choice at the most dramatic moments. " Thus sang Moses and the Children of Israel," after the crossing of the Reed Sea. Later, we have the Song of The Well in Numbers, the Song of Devorah in Judges and the Song of David in Kings. These songs are outpourings of joy and gratitude to God after the manifestation of His miracles and salvation.

There is another type of song in the Torah. This song is reflective, often containing moral education and even rebuke within its stanzas. I refer to the song of Ha'azinu, " Listen, O heavens, and I shall speak, and let the earth hear the sayings of My Mouth." Similarly, many of the Psalms contain ethical teachings and deep reflections about God and His world. Thus, as I heard explained beautifully by Cantor Ira Rohde, there are two powers of music. To express and to internalize. Music can express joy, as at the Reed sea, love, as in the Song of Songs, sadness, as in the Book of Lamentations, and many other emotions. But its power to bring a message into the human heart, as in Ha'azinu, is even more potent. It is for this reason that the entire Torah is called a song.

Music was always a part of the people, but it took on new significance with the construction of the Temple at Jerusalem. From the moment that King David " danced with all his strength," in front of the Holy Ark as it entered Jerusalem, all religious ceremonies would be accompanied by music. In the Temple itself, there was a choir with some instrumental accompaniment that sing as the daily and special occasion sacrifices were brought. The First Temple period, from the 9th century B.C.E. to the year 586 B.C.E. was the time when the Psalms were composed. Their public performances were probably Temple based. By the time of the second Temple, in the next five centuries, the order of which Psalms would be chanted at which service became firmly established. The custom of reciting the daily Psalm practiced in synagogues today is a continuation of that custom. 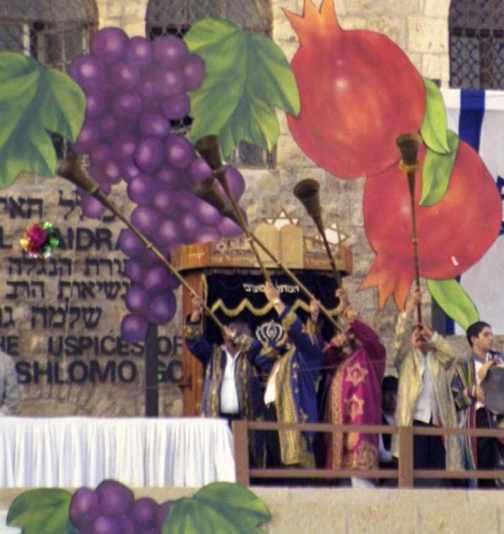 After the destruction of the 2nd Temple in 70, there was a movement among the sages to forbid music, in deference to the inability to perform music in the Temple. " How can we sing the song of God on strange soil," was the sentiment expressed during the Babylonian exile in 586 B.C.E., and it certainly applied now. Indeed the feeling of " If we can't sing for God, isn't it inappropriate to sing for ourselves?" took hold. Nonetheless, this was a decree that the people could not live by - it was too harsh. After all, how can one celebrate a wedding with no music? So the compromise was to maintain some symbolic reference to sadness over the destruction of the Temple, such as breaking a glass and placing ashes on the groom's forehead, while allowing music to celebrate the joyous occasion.

One of the main hallmarks of the Jewish concept of music is that it is to be a vehicle of expression for man's deepest feelings. In other religious traditions, music was seen as being the language of the angels, and as such to be imitated. Hence the " heavenly" feel of much church music. Jewish music, however, was the language of the people, and thus has a more plaintive feel to it.

Music took hold in the synagogue, which replaced the Temple in Jerusalem as the focal point for Jewish communal life. There has always been a careful balance between innovation and tradition in Jewish religious matters, certainly in terms of synagogue song. The great scholar R' Jacob Molin, in 14th century Germany, codified the melodies which were not to be altered in the Ashkenazic (European) Jewish world. These tunes, mostly sung on the High Holidays of Rosh Hashana and Yom Kippur, were referred to as " coming from Sinai." What he meant by this description is not clear, however he seems to be saying two things. First, that these melodies are indeed ancient, perhaps even dating back to Temple times. Second, that they must be sung as if they were given at Sinai. Why such a strict requirement? Because Rabbi Molin understood the power of music, and knew that if these melodies, with their evocative capabilities, were altered, the congregants would be deprived of the full emotional experience that the High Holidays should provide. In other prayers at other times innovation may take place.

With the growth of western musical influence, synagogue music changed, especially in the Germany of Mozart, Beethoven and Schubert's days. The Liberal German synagogues now hired choirs and composers to create works for the synagogue which would be on a comparable level to the secular music of the day. Many works of Louis Lewandowsky, for example, are reminiscent of secular composers such as Felix Mendelssohn. The challenge for these synagogue composers was to fuse the traditional requirements of synagogue music with what the ears of the day expected and enjoyed. Sometimes, they went further towards the latter, but never tampered with Rabbi Molin's " Sinai tunes."

The rise of the Chassidim in Eastern Europe in the 18th and 19th centuries introduced a different role for music. Chassidim placed a great emphasis on the emotion of joy in the service of God, and thus music was needed to evoke joy, not the solemnity of Western European synagogue music. Chassidic tunes were often in the dance rhythms of Poland and Russia, as well as marches and other lively styles. This type of music helped create a joyous atmosphere for prayer.

To this day, the influence of Chassidic music is very strong, especially in the current age of pop. Indeed, just as the early Chassidim borrowed from their neighbors, contemporary " Jewish" music is sounding less and less Jewish in its rhythms, chord vocabulary and feel. I feel that this is a sad development, as the messages of much contemporary pop are contrary to the values of modesty so central to Jewish tradition. When a dance hit with suggestive lyrics is barely distinguishable from a dance hit with a Biblical lyric, I feel that the Biblical lyric is being cheapened. Nonetheless, the contemporary music of higher taste is finding its way into the synagogue, even as Rabbi Molin's " Sinai tunes" are untouched to this day.

The truest expression of authentic Jewish music, however, is in the high art form of Hazzanut, or Cantorial art. Here, an operatic flavor built upon ancient Jewish musical motifs comes into its own as a mode of expression. A good Cantor knows how to create intense feelings of devotion while using traditional melodies in his creations. Nonetheless, the modern cantor must innovate as well, and bridge the gap between the music that the people hear all around them, and the synagogue tradition. He must remember that the function of music in Judaism is to inspire man, not imitate angels, and must use all the tools that he has, both in vocal talent and in creativity.